As my last post anticipated, a week or so ago my son and his grandpa went for a hot air balloon ride.  On Friday they were instructed to meet at 7:00 a.m. at site “W”, a church in West Salem.  (The church has a sign that says “Drive-In Church”.  I’m still trying to figure out how that works…)  The balloon van arrived and the crew started unpacking.  The whole process of unpacking and blowing up the balloon took about a half hour – I’m always impressed when people accomplish such big things in so little time!

The whole balloon is in this bag!

Cold air is blown into the balloon with a fan: 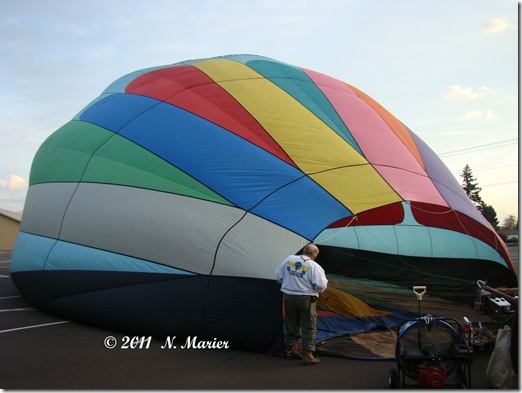 The burner is fired up and hot air is blown in:

Balloon is up and they’re ready to go! 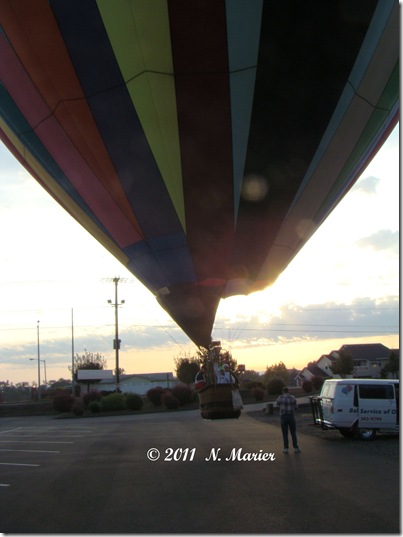 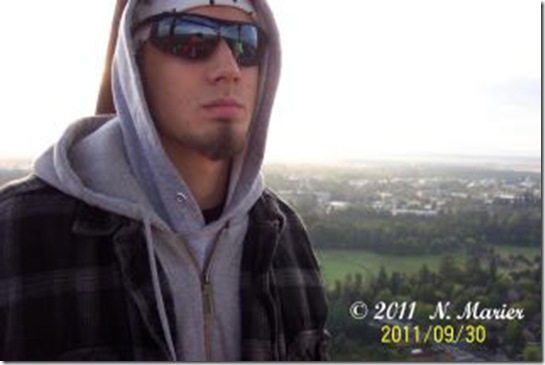 I had planned to spend the morning checking out some estate sales, or rushing home to take photos if the balloon was going to come our way.  But, the winds were “light and variable” and the balloon floated off toward downtown.  I was snapping away when one of the crew asked if I wanted to come with them in the chase van. Yes!

When they call it a “chase” vehicle, they aren’t exaggerating.   There’s a sign on the back of the van that says “Warning: Frequent Stops and Indecisions!”  While we zoomed and stopped and looked and went around the block and zoomed the other way, Dad and Ben were floating over the river looking down at the Oregon State Capitol building with the Gold Pioneer on top, and all of downtown Salem; and listening to the balloon pilot, Jim Desch, guide them through their aerial tour.  Jim, who owns Balloon Flying Service of Oregon, has been flying since 1989 and knows every possible landing spot in the area.  They estimated that this spot would work so Cecil pulled the van in here and stopped: 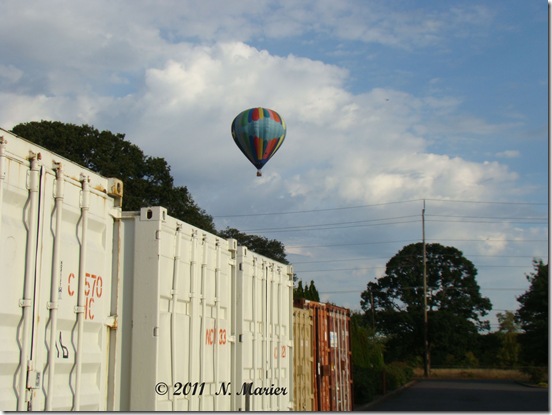 But…oops!  The winds changed direction and we had to jump in the van and take off to the east, where there was a nice big field next to the city shops.

It cleared the wires effortlessly (although from the ground it looked like they were coming in right on top of them!) 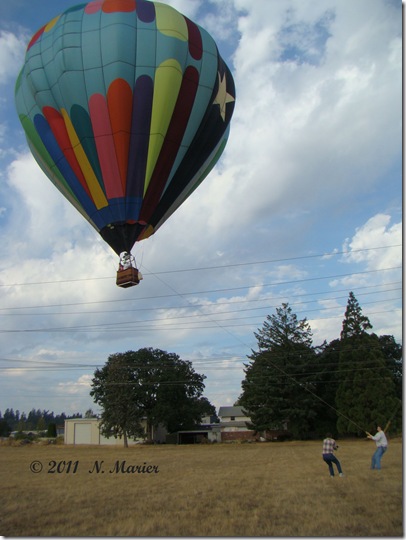 Time to pack up… 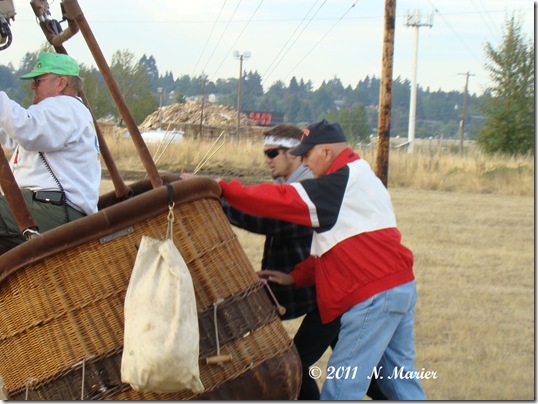 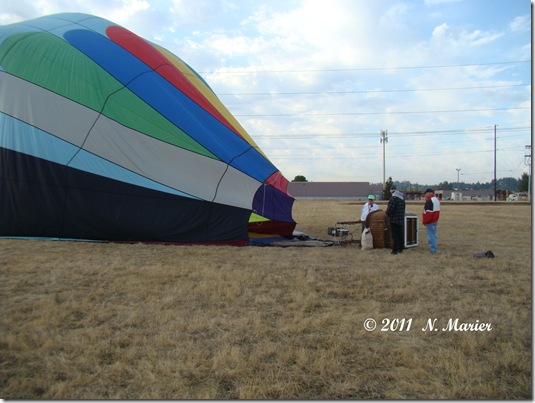 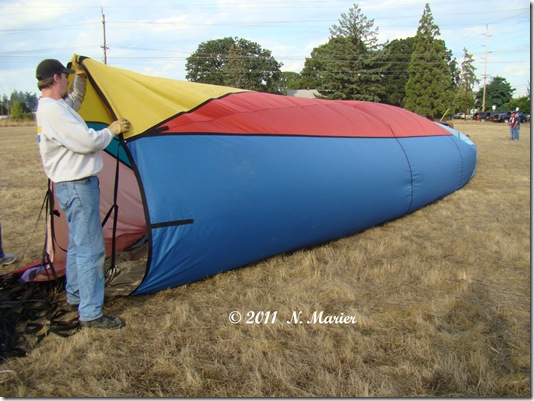 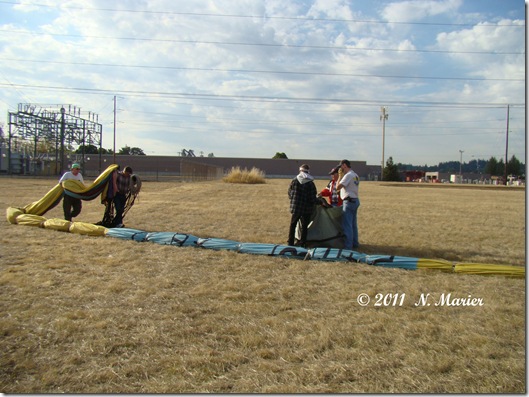 They have to squish it so it will fit in the van! 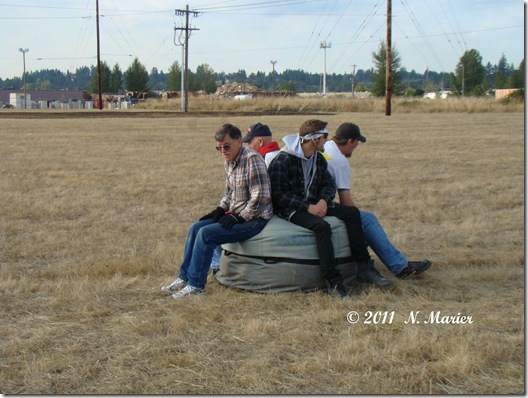 When everything was packed up we all rode in the van back to the launch site, and took our cars to Wallace Marine Park in West Salem for the traditional champagne or sparkling cider breakfast.  Jim graciously invited me to join in, (but only those who flew in the balloon were allowed to have champagne)!

Setting up for breakfast.

Ben wanted to go throw a rock in the river (ka-bloop!)…

Before breakfast, Jim introduced the champagne toast with a history of ballooning… 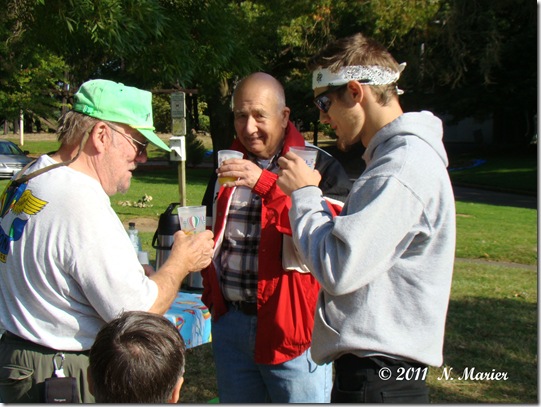 …and presented Dad and Ben with framed Certificates of Ascension! (They also got to keep the champagne cups with the little balloons on them!)

Breakfast included croissants with strawberry cream cheese or chive cream cheese, crackers and a cheese spread, chocolates, and brownies. For beverages we could choose hot chocolate with whipped cream and sprinkles or coffee. Everything was delicious, and I was enjoying the meal and the conversation (mostly about Jim’s former career – monument making) so much I completely forgot to take any photos of the food!

I JUST realized that the whole time Ben and Dad were on their balloon ride and I was in the chase van, I didn’t once think of the song “Up, Up and Away” until just now when I was trying to invent a title for this post. Can you believe it?

(Sorry about the weird fonts in this post.  I can’t figure out what happened, and it won’t let me edit the font sizes!)

These photos were taken 2 weeks ago, I was in bed and heard the WHOOOOSH! of the balloon burner and ran outside to the porch to take a photo since it was flying so low.  As I was waving enthusiastically at the people in the gondola I realized I was still in my nightie and had sleep hair…but the people were turned the other way so I don’t think they saw me (whew!)  This balloon often flies over our house and has had to make a few emergency landings in our neighborhood.  This time it was aiming for a church parking lot but ended up in someone’s yard instead!

Anyway, the other day my dad called and invited my son and me to go for a balloon ride in this very balloon! (It’s on Dad’s “bucket list”, last year he and Ben went on the Slingshot ride at the Fair, and he has been skydiving about once a year for the past 4 years. Dad had to miss skydiving and the rafting trip this year because of problems with his heart, and he was quite disappointed! Now he’s good to go, though!)

After the balloon flight there is a picnic continental breakfast with champagne or sparkling cider. It sounds like so much fun. I would LOVE to go. But, last time I was up high (Ferris wheel) I had a small panic attack and couldn’t stand to look. Since there isn’t room to sit down and hide in the balloon gondola and I don’t want to be a party-pooper, I decided not to go this time. My logical brain wants to go, but my bipolar brain is a total spoilsport.

So, Ben will be going with his grandpa bright and early tomorrow morning – there are multiple start points so they will find out tonight where they start (depends on the weather and wind).  He is super excited.  It’s so great that Grandpa includes Ben in all his adventures.  I’m going to have him text me if they are going over our house so I can go out and wave and get a photo!  It’ll be awesome!